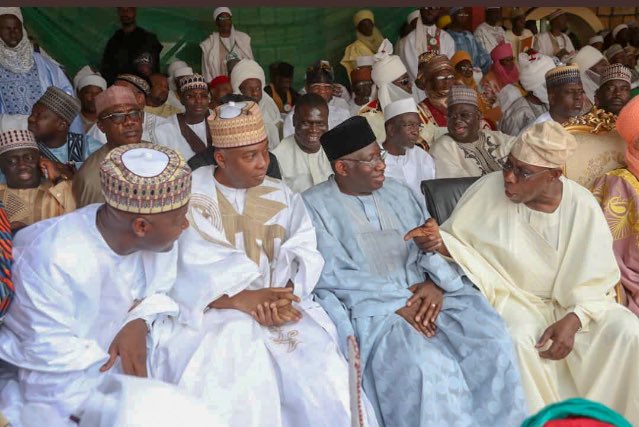 Nigerians have taken to social media to react to a photo of former presidents Goodluck Jonathan, Olusegun Obasajo, Senate president Bukola Saraki and Speaker of the House of representatives, Yakubu Dogara, which was taken on Sunday.

The photo emerged from the turbaning ceremony of the Presidential Candidate of  the Peoples Democratic party(PDP), former Vice-President, tiku Abubakar, as the Waziri of Adamawa.

It would be recalled that former president, Obasanjo and vehemently opposed to former president Jonathan, returning to power in 2015. Obasanjo withdraw his support from Jonathan, and gave it to president Muhammadu Buhari, because according to him, Jonathan was too incompetent.

However, seeing the men in the photo after all that has transpired between them, has sparked a hot topic on the Nigerian social media sphere.

Here’s what Nigerians have to say:

With this picture! Buhari is gone.

All together against Buhari.

If you are still in doubt, you need medical checkup. pic.twitter.com/8d3TRadcGN

Why keep so much grudge? If Saraki, Jonathan, Obasanjo and Atiku can be pictured smiling and laughing together. You too can make peace with your previous enemies. Even the one that stole your ex or first love. pic.twitter.com/CInFmvvxWV

Doesn’t look like a fair fight
Dont tell me Bubu has Lagos, Lagos alone can’t give him the presidency pic.twitter.com/BzH2zvGZ3n