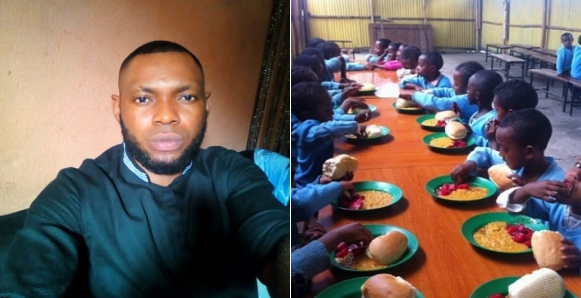 A Twitter user has accused a food vendor in charge of the school feeding programme of starving kids while taking the food meant for them to her home.

The tweep, identified as Odudu Johnson said the food vendor, who serves food to children of QIC primary school in Ika LGA, Akwa Ibom, serves only half the meal to children then takes the rest home, leaving a lot of the kids hungry.

“So today i almost got into a fight with the food vendor in charge of the school feeding campaign in my LG . Went home for something and I decided to chk things up for myself. Woman shares half the food cooked and takes the rest home even when the kids are still hungry .

“I dragged her that she must share everything from to till FG decides to stop the SCH feeding campaign. If we don’t stand up against impunity, we will blame the government till the world comes to an end.
“I’ve pictures and video evidence of the inferno but I don’t want to publicize it yet”.
The National Home-Grown School Feeding Programme (NHGSFP) reached out to Mr Johnson to enquire where this atrocity is going on, so they can look into it.

Mr Johnson was also commended by other twitter users on his involvement in implementation of national policies.

The National Home-Grown School Feeding Programme is a Nigerian Government-led, cost-effective school feeding programme that uses farm produce locally grown, to feed pupils. The programme is meant to tackle poverty and improve the health and education of children