Home News Feed Viral photo of a little boy staring at the photo of his...
Facebook
Twitter
WhatsApp 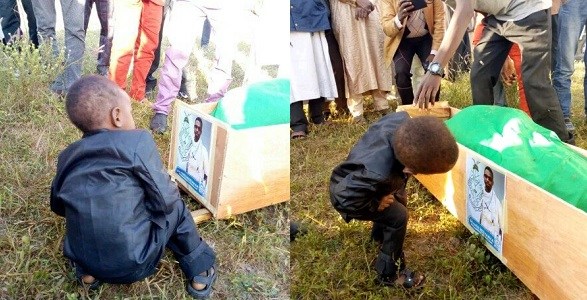 A little child has been caught on camera staring at the photo of his father who was killed during the recent clash between police and Shi’ites.

Photos have shown the really heartbreaking moment a young boy was spotted staring at the photo of his father who was recently killed during a fallout between security operatives and the Shi’ites members.

Recall that two weeks ago, the city of Abuja recorded a number of clashes between members of the Islamic Movement of Nigeria aka Shi’ites and security agents.

Many Shi’ite members were reportedly killed during the clash while the sect members in turn burnt a vehicle belonging to the FCT police command and also inflicted varying degrees of injury on some soldiers.

One of the sect members killed during the clash was Mustafa Ingawa, a father of one. He was buried yesterday, November 8th.

During Mustafa’s burial, his little son was spotted staring at the dead man’s photos which were pasted on the coffin. The photo have left many people heartbroken on social media.