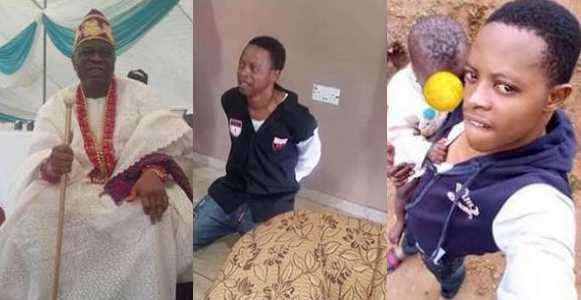 Two days after the Lagos police declared wanted a young #Togolese who allegedly killed his boss, he has been arrested.

The suspect was arrested, this morning, at his hideout in Ondo State and he is currently at Fagun Police station, Ondo.

Chief Ope Bademosi, a socialite and Chairman of Credit Switch Technology, employed the young man as his cook, on Sunday.

He, however, killed him in the early hours of Wednesday, at his residence in #Ikoyi, Lagos, and fled with his valuables. The deceased was reportedly found in a pool of blood, with multiple stab wounds.

“When we got inside, we saw the man in a pool of blood with the volume of music increased to the highest level,” a neighbour said.

In an interview with a homicide investigation officer, a source said: “This is very wicked. In fact, that guy must be a devil itself. He stabbed the man in multiple places. I was the first to enter the apartment.

In fact, the music was so loud that even if you were to be killing 20 people here, no one would hear them scream. After committing the act, the guy went to the toilet and pulled off the white uniform meant for cooks he was wearing because it was all stained with blood.

He also left the knife he used inside the toilet there. If you see the knife, it’s a very strong, long and sharp knife that could only be authorised for military personnel.

Afterward, he ransacked the whole apartment and carted away all valuables he could lay his hands on including an unaccountable sum of money, jewelries and the deceased phone.

What baffles us more is that, no one seems to know anything about him because he was only employed few days ago and brought from Ondo state to resume just this last Sunday. And they only know him by his first name, which is Sunday.”