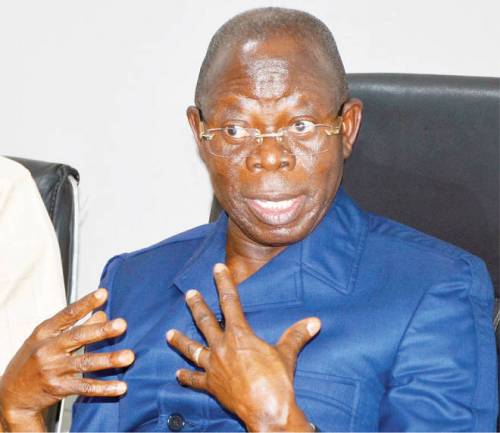 The depth of filth in the APC primary election can contain a tsunami. The “inglorious” exercise and its resulting attrition betray the anti-corruption sloganeering of the Buhari administration.

A lot has been said about the alleged involvement of Adams Oshiomhole, APC national chairman, in the corruption shin-dig.  But what is the position of the DSS? The secret police interrogated Oshiomhole, and really did ask him to resign over allegations of bribery.

Was it right in making this demand of him? What effectuated the agency to toe such a controversial and unpopular path?

Well, the DSS has submitted the report of its investigations to the presidency, and it recommended the prosecution of the APC chairman. The new DSS chief is said to be a man of integrity and unbending principle, and will not brook any compromise.

The case against Oshiomhole is that he allegedly received a total bribe of $55 million, some of which were allegedly remitted into proxy accounts, one of them his niece’s. Though some party chieftains claim it is $80 million. The DSS report contains, much, the details of the transactions. He has strenuously denied these allegations, though.

But why does the presidency appear lethargic in this matter? Why is there no reaction at this point?

I believe this is a test, which if flunked would pooh-pooh whatever credibility this government has left. Though President Muhammadu Buhari seems resolute about allowing Oshiomhole face the law, there seems to be counter forces within the presidency and in the APC against his resolve.

There is a sore argument that the case is a party affair; hence should not be the subject of a security probe or prosecution. But does the APC exist on Mars? Is the party a law onto itself? Does it exist outside Nigerian laws? If a crime has been supposedly committed the offender must submit to the law of the land, and not the APC law.

Really, it is a mockery of the anti-corruption war if the presidency succumbs to pressure and ride with the current on this issue. It will be another own goal. In fact, if the APC government deodorises the alleged corruption in its own house, it cannot fumigate it elsewhere.

The silence of the presidency is deafening. It must realise that this case has gone beyond the party. It is now an issue of state interest, and should be treated as such.

But will the presidency ride against this tide?