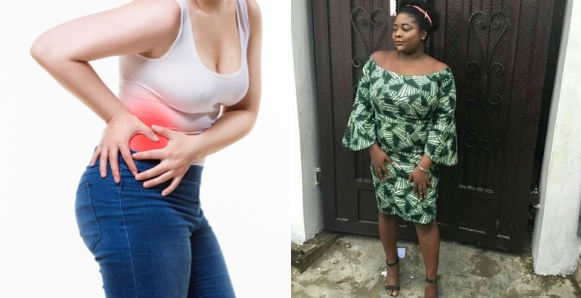 A woman has taken to Twitter to educate other women about ovarian cyst after she had a scary episode.

Omolabake revealed that she had a sharp pain in her stomach that rendered her helpless and when she was rushed to the hospital, it was assumed to be food poisoning. But she had no idea that she carried a ruptured ovarian cyst about and an almost ruptured appendix.

Thankfully, her doctors noticed it before it was too late.

“All I had was pepper soup and juice That night and I couldn’t stand up again when I got home. How I carried a ruptured ovarian cyst and almost ruptured appendix around for days. Ladies this is your thread.

“I got back from work that faithful Friday night, after laughing and gisting with my colleagues. Then I stood up to ease myself and went back to lay down. The next pain I felt was so sharp that I zoned out immediately without my sister noticing.

“I screamed and told her I can’t stand up again. She asked why? I told her my tummy wants to tear apart. She laughed and said how? I had to explain it wasn’t funny. The next thing I started saying was Joke I don’t want to die. Then she became scared.

“And she dragged me up with my fat body to the next nearby hospital which I aslo use. Now prior to this day, I treated malaria and typhoid in this same hospital and I felt I was fine. Until I had an asthma attack. And I went back to the hospital.

“Now this Friday this doctor kept asking what I ate that night. I told him, he made fun of me saying I didn’t bring some for him too. He innocently thought I had food poisoning. Until the next day…
“When he came to check me in the morning. Please be reminded I was on a lot of pain meds so I couldn’t feel anything again. He decided to press my lower abdomen. Ladies I screamed again for my life. He said I thought you are fine already Ayo.
“He immediately sent me for a scan Ladies a cyst was dancing in my ovaries. And it was larger than normal. First let me explain my little knowledge of cysts with the help of our doctors here @OlufummyA @Deekachy_md etc..
“Cysts grow in almost every woman after ovulation and they always wither and die without the woman noticing. If she notices, antibiotics can be given to her and it can wither and die too. So back to my case, my doctor thought mine will wither with antibiotics.
“The next day he came to press it again, and I screamed too He knew this was past him. So he called a surgeon and a GYN to come and check me. The GYN said I needed to be operated upon immediately. Omo I catch fear as the GYN also suspected Appendix.
“Ladies I had the surgery the next Monday and they found out it was already ruptured. I give my testimony today but I beg you ladies please don’t ignore that unsure pain today. Visit your doctor and tell him how you feel. The end! I’m open for questions tho”.