A worker who got trapped inside the rubble of a building  which collapsed in Port-Harcourt, has been rescued four days after.

The man was rescued alive in the early hours of this morning, four days after the seven-storey building came crashing down at Woji road in New GRA in Port Harcourt, Rivers State.

He was rushed to the hospital in an ambulance after being rescued by emergency workers and some Rivers State government officials. 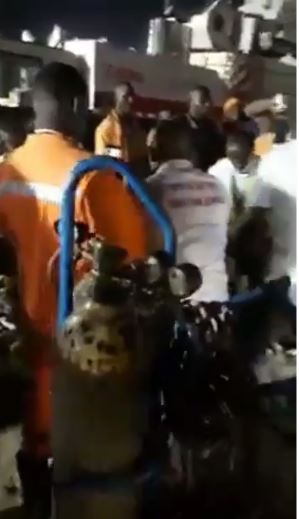 The man was rushed to hospital

The structure was under construction before the tragic incident which left at least four persons dead, many injured and an unspecified number of workers trapped.

When the building collapsed around 4:30 pm on Friday, November 23, up to 60 persons – mainly construction workers – were said to have been working on it.

Around 7:30 pm, three hours after the collapse, emergency workers had rescued a total of 21 persons from the rubbles.

Meanwhile, Rivers State, Governor, Nyesom Wike, has ordered the immediate arrest of the owner of the collapsed building on GRA Phase 2 in Port Harcourt.

Watch a video of the man being rescued below: