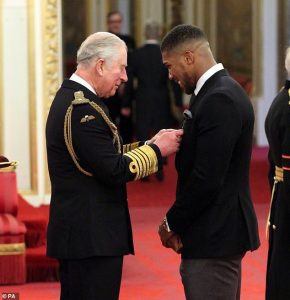 British-Nigerian heavyweight boxing champion, Anthony Joshua has been awarded the OBE by Prince Charles at the Buckingham Palace on Thursday, December 20, 2018.

The 29-year-old was awarded for his services to sport. Joshua made his professional debut in 2012. He won an Olympic gold medal for Britain at London 2012 and is the current IBF, WBO and WBA heavyweight world champion.

Meanwhile, the heavyweight champion recently declared his intention to battle British boxer, Deontay Wilder. “As I’ve said, I’m willing to fight Deontay Wilder -April 13th in London. So I don’t know what more I have to do to get that message across. He’s more interested in fighting Fury. Tyson Fury holds no world titles.” Joshua told ESPN