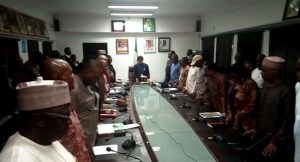 The Academic Staff Union of Universities and the Federal Government have once again failed to reach an agreement. The Union Held a meeting with the Minister of Labour and Employment, Chris Ngigie, at the ministry’s office in Abuja, on Monday.

ASUU National President, Professor Biodun Ogunyemi and other officials of the union stormed out of the meeting after about two hours after they reportedly failed to reach an agreement with the federal government. However, the Minister said discussions were still going on a mutual agreement is likely before Christmas.

“There is no walk out because we even broke into a session that is in camera. We can say they were dissatisfied because he is a union leader so if he doesn’t get 100 percent he might not be smiling. We have already agreed on the implementation and we have given ourselves some work plan”

The minister added that the FG were exploring all options possible to enable students resume lectures in the first week of January. ASUU embarked on the strike on 4th November, 2018, due to the government’s inability to honour the Memorandum of Understanding signed between both parties in 2017.