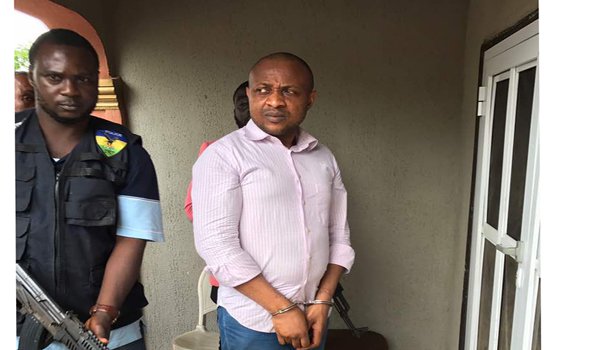 According to a report by The Nation, an Ikeja Special Offences Court in Lagos State heard yesterday why an attempt made by suspected billionaire kidnapper, Chukwudumeme Onwuamadike aka Evans, on Chief Obianuju Vincent, the chairman of ‘Young Shall Grow Motors’, failed.

The narration of the botched kidnap attempt was made before Justice Oluwatoyin Taiwo by Inspector Idowu Haruna, a member of the Special Intelligence Response Unit of the Inspector General of Police (IGP), who told the court that it failed because the defendants were not expecting their victim to go out that night with escorts.

It was during ‘trial-within-trial’ on the admissibility of the confessional statements of the defendants.

Evans is standing trial alongside three others, Joseph Emeka, 29, Chiemeka Arinze, 39, and Udeme Upong, 43, on a seven-count charge bordering on conspiracy, kidnapping and murder.

Led in evidence by the lead prosecution, Adebayo Haroun, Insp. Haruna told the court that he recognised Evans and others during investigation into the botched kidnap attempt and attack on Chief Obianuju.

Haruna said the attack on Obiajunu was carried out on August 27, 2013 along 3rd Avenue, FESTAC Town, Lagos while returning from where he had gone to play local “draft game” with his friends.

“During the gun duel between Evans and his men and the escort of “Young Shall Grow Motors’ chairman, he (Chief Obiajunu) was shot in the left arm. One of his escorts, Corporal Ngozi, was shot dead; his driver, Peter Nweke, was shot dead.

“Three of the kidnappers were shot dead by Inspector Simon, an escort with Chief Obiajunu, while other kidnappers escaped.”

He said two rifles were recovered by ACP Okoro of the FESTAC Police Command, while the kidnappers went away with other rifles used in the operation.

Haruna told the court that immediately the matter was reported at the FESTAC Police Command, the first defendant, Evans, was arrested and that he made confessional statement to the police, admitting being the leader of the gang.

He said the third defendant, Arinze, said he did not know Chief Obiajunu would go out with his escorts the night he was attacked, contrary to the report he gave the gang that he did not move with them whenever he was going to play draft with his friends, adding that that was why they chose that night to attack him.

Haruna said Evans and co-defendants willingly volunteered their confessional statement and affirmed same before a senior police officer, Deputy Superintendent of Police (DSP) Bello, who attested to the statements after they were read to each of them, stressing that they were not coerced nor forced to make and sign the statement.

Evans had in another kidnap trial before Justice Adedayo Akintoye of Lagos High Court, Igbosere, claimed that he was locked up in the toilet by officers of SARS in Ikeja when Falana visited him.

But at yesterday’s proceeding, Ekundayo, while under cross examination by Ajanaku, Evan’s counsel, told the court that such incident never happened.

”His (Evans) lawyer was not there and none of his relatives was around,” the witness said.

Justice Taiwo adjourned the case till December 31 for continuation of trial.