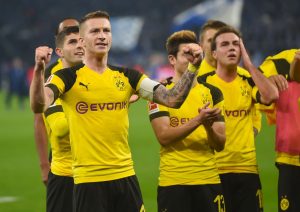 Borussia Dortmund have enjoyed a fantastic start to to life under Swiss manager, Lucien Favre. Die Borussen sit nine points clear at the top of the Bundesliga table.

Share
Facebook
Twitter
WhatsApp
Previous articleWoman Who Stabbed Her Drug-Addict Daughter To Death Narrates What Happened
Next article‘My Family Is In Town So I Have My Confidence Back’ – Manchester City Striker, Gabriel Jesus, Said After Ending His Drought With A Brace To Send City Back To The Top Of The Table
- Advertisement -