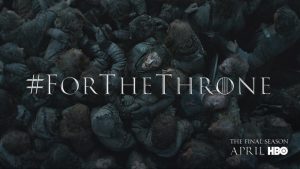 The first ‘official tease’ for the highly anticipated season 8 of the series. The tease was released via the official twitter account of the series. According to the director, David Nutter, every episode in the final season will last for at least 60 minutes.

Earlier, it was announced that the season will consist of episodes that will wrap up the sprawling tale and bring an end to one of the most popular shows in the world and HBO’s biggest hit in its history. The first episode, written by David Hill and directed by David Nutter, does not have a specific air date at this time. Game of thrones will make its long-awaited eight and final season appearance in April, 2019, HBO revealed.