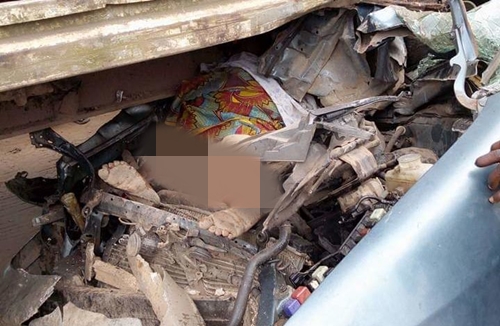 Five people were reportedly feared killed after their car rammed into a stationary truck in a tragic crash which occured at Umunka village along the Aba-Port Harcourt Expressway.

According to The Nation, sources who witnessed the incident confirmed that the passengers in the Sienna SUV numbering five died on the spot.

While speaking to a correspondent, one of the eye witnesses who gave his name simply as Fred said “we were all here and the next thing we heard was a loud bang.

“By the time we got there, we saw the light Green coloured Sienna trapped under the truck which has been stationary for some time now. From the way it happened, it looks like either that the driver lost control of his vehicle or that his mind was not where is driving to. It could also be that he is not familiar with the road.

“But like every driver who is not familiar with a road, the person should not be driving recklessly as could be the case of this driver. The incident happened in the afternoon and that makes us wonder why the accident should happen.

“Though a lot of people said that the driver may have noticed that the truck was stationary very late, others suggested that it could be as a result of brake failure.

“The question is if the truck owner failed to indicate that the truck broke down with the usual green leave that they drop on the road, how did the driver ram into the truck to have such impact on the car and the passengers if he was not on top of speed?

“The car stuck deep into the stationary truck that we had to call for the assistance of another truck to pull the Sienna out of the other truck to see if there are people that could be saved, but when that finally happened, no passenger of the Sienna was alive.”

Another eyewitness who couldn’t hide her emotions lamented the death of the accident victims, stating that it was high time the federal government through the ministry of works becomes alive to their responsibilities; by making sure that Nigerian roads were safe for use.

When contacted, the Aba Unit of the Federal Road Safety Corps (FRSC) through their official line, said that they were yet-to-be informed about the incident.

A staff of the government agency who pleaded not to be mentioned at the time of this report said that they have dispatched a patrol team on the Aba-Port Harcourt axis of the expressway to investigate the incident.