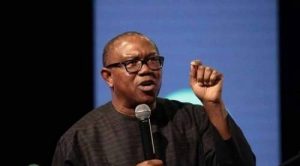 Reno Omokri, a former aide to former President Goodluck Jonathan, has also weighed in on the alleged freezing of the account of Peter Obi.

The former aide was reacting to an announcement by the Peoples Democratic Party (PDP) on Saturday, in which the party revealed that the account of its vice presidential candidate, has been frozen by ‘agents’ of President Muhammad Buhari.

Omokri in his reaction, slammed the Economic and Financial Crimes Commission (EFCC), for not freezing accounts of Laws Babachir and Maina, who were accused of corruption, a while ago – yet, freezes the account of the former Anambra state governor.

He, then goes on to state that, these types of actions make it easy to believe that Buhari, is actually  a clone.

They have not frozen Governor Umar Ganduje’s account, or Babachir account. They have not even frozen Maina’s account and even tried to reinstate him. But they found time to freeze Peter Obi’s account. These are the type of actions that make this Jibril story believable!