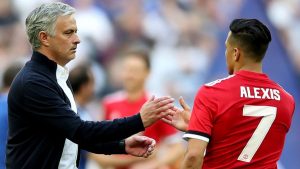 Manchester United forward Alexis Sanchez has reacted to a report which claimed that he made a bet of £20,000 with team-mate, Marcos Rojo, about the sacking of Jose Mourinho. The  Chilean International who is currently recuperating from a hamstring injury was said to have contacted Rojo following Mourinho’s sack on Tuesday that he owes him £20,000.

Although the Portuguese tactician publicly defended the former Arsenal forward following awful showings after he joined the Red devils by saying that ” it was difficult for him to integrate midway through a season having joined in the January window”.

Despite this, the Chilean has not been able to rediscover the form that made Manchester United agree to his swap deal which involved Mkhitaryan going the other way.

Sanchez, however debunked such report today and also went further to laud Mourinho by saying

“Jose gave me the chance to play for the best team in the world,” he wrote.

“I only have gratitude for him. We are a truly United team.”

This is FALSE!!!. José gave me the chance to play for the best team in the world and I only have gratitude for him. We are a truly United team. We are MANCHESTER UNITED. Respect. I can't wait to help the team !. Good luck tomorrow family! pic.twitter.com/9uhXqd5iEU