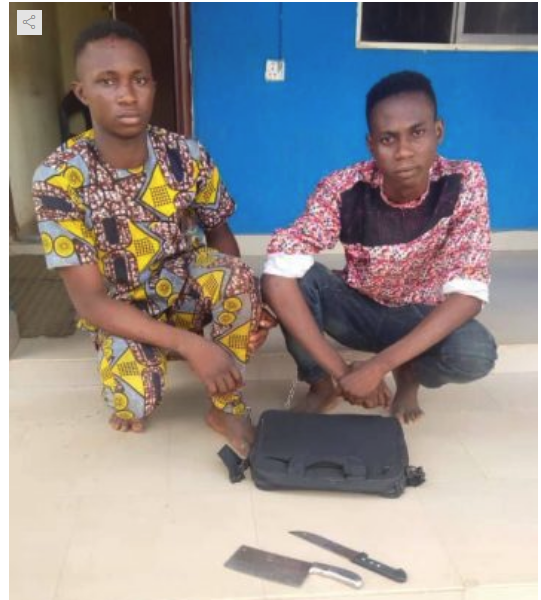 A Nigerian female lecturer identified as Mrs. Busola Oke Salako successfully effected the arrest of two young robbers who aimed at attacking her home with the sole purpose of carting away most of her valuables.

It was learnt that Busola was at her residence in the Iyana-Iyesi area of Otta in Ogun State, when her generator set suddenly went off at about 11:00pm on Friday, November 30, 2018.

With the impression that it was a minor fault, she sent the maid to go and fix it, unknown to them that it was the intentional move of suspected armed robbers, to gain entrance to the house.

Immediately the girl opened the door, the two marauders held her and covered her mouth with cloth, threatening to kill her if she makes noise.

Her initial screaming when she ran into armed bandits, suggested to the madam that the household was under the siege of bad boys, propelling her to apply wisdom by quickly bolting the door from the back before making a distress call to the police and some members of the Community.

On receiving the call, the DPO Onipanu Division, SP Sangobiyi Johnson, quickly mobilized his Anti-Robbery men to the scene where the two suspects, Akindele Ramon, 22 and Paul King, 20 were were promptly arrested with the help of members of the community”, the PPRO stated.