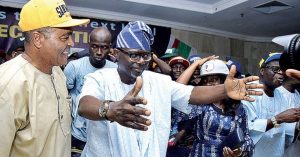 Lagos state governorship candidate of the All Progressives Congress(APC), Mr Babajide Sanwo-Olu, in recent chat, with journalists, spoke on a wide range of topics.

During the chat, the three-time commission of Lagos, did clear the air on allegations by Governor Akinwumi Ambode, a day before the party’s primaries, that ushered in Sanwo-Olu’s candidature – In which, Ambode accused Sanwo-Olu of having mental illness and was arrested in the U.S for spending fake dollars.

What will you say about Governor Ambode’s statement regarding your mental health and allegation of spending fake dollars in the US?

This is the umpteenth time I will be asked this same question and my answer has been the same. You need to know that during politicking, things happen and people say things they don’t really mean all in the spirit of politics. They have to say it just to throw darts at the other person. Governor Ambode is someone I have great respect for. He is the Governor of the state. He is my Governor and he occupies the office I am aspiring to. I am in no way going to speak against that office or the person that sits in that office. Like I said before, it was all politics that went the wrong way.

The simple answer is, none of those things happened. I have never been detained in the US or any country in the world. I did not spend fake dollars anywhere in the world and I am not that type of a person. I was still in the United States a couple of months back. I have never been to Gbagada General Hospital for any ailment. I don’t have any medical record at the hospital.

In fact, the two times I have even been to Gbagada General Hospital were to donate. One was on my birthday when I went around the wards to donate gifts. The second, I was on charity mission, looking out for those who needed help which I provided. That is who I am and who I will always be. I have done this in the last 5 to 6 years.