Home Sports Football ‘I love tap ins but come on put some RESPEK on my...
Facebook
Twitter
WhatsApp 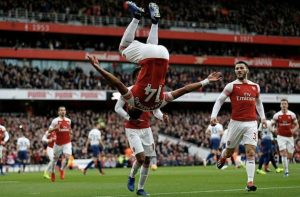 Arsenal striker, Pierre-Emerick Aubameyang, scored a brace as the Gunners saw off Tottenham during their North London derby at Emirates stadium  in the fixture corresponding to match day 14 yesterday. The Gunners have now leapfrogged their city rival, Tottenham, into fourth position as a result of the victory yesterday.

The former Borrusia Dortmund striker has often been criticized  by football lovers as most of them claimed that he only score from a tap ins. However, his second goal during the tie yesterday suggests otherwise as he had to display great technique to bend a lovely shot into the left corner from outside the penalty area to pull his side level.

The Gabonese International took to his twitter handle at the end of the encounter to lash at his critics by demanding that he deserves some respect as a result of his well taken goal yesterday.

I love tap ins but come on put some RESPEK on my name 😆😂😂😂😂💪🏽 #NorthLondonIsRed #WeAreTheArsenal #COYG pic.twitter.com/pAxsVoIADn