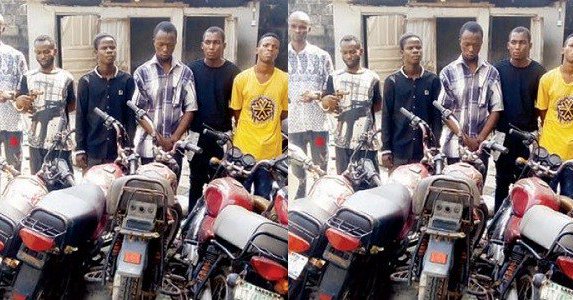 A robbery suspect who was arrested alongside his colleague by operatives of the Federal Special Anti-Robbery Squad, Adeniji-Adele Annex, has disclosed that they only robbed yahoo boys.

The suspects – Sunkanmi Emmanuel, aka Federal, 30 and 28-year-old Ahmed Agunbiade, aka Omojoyibo who reportedly specialized in robbing club goers of their belongings, including motorcycles in the communities, were arrested last week in the Igando area while they were reportedly going for a robbery operation.

The police officers also arrested one Dotun Ogunsanya, aka Dotman, for buying stolen phones and motorcycles from the syndicate while a commercial motorcycle rider, Nurudeen Agbeyewo, was nabbed for allegedly taking Federal and Omojoyinbo for operations.

Punch reported that 15 motorcycles, three cut-to-size guns, cartridges and a plasma television, were recovered from the robbery suspects who were arrested following complaints to the officer-in-charge of FSARS, Adeniji, DCP Ibrahim Kaoje.

“Emmanuel, aka Federal lives at Totowu, Ogun State while Omojoyibo resides in Igando, Lagos State. A river separates the two communities. “They specialised in robbing people at night at gunpoint. Three guns were recovered from them. They have a standby motorcyclist who takes them to locations where they carry out their operations. The two prime suspects (Federal and Omojoyibo) were traced to a hotel at Totowu. A motorcycle was recovered from them.

“Ogunsanya, aka Dotman is the major receiver. There are other suspects at large who sold stolen items to him. Federal is a member of Eye Cult. They would go to clubs and hotels and rob visitors there while they were leaving. They terrorise Idimu, Igando and Ikotun areas of the state,” a police source said.

However one the arrested robbery suspects, a 30-year-old father of five disclosed that they only robbed yahoo boys and not innocent people.

He said, “I came to Lagos in 1998. I was an apprentice mechanic. In 2003, the government demolished my boss’ shop and he went back to his village. I became a commercial motorcyclist. After some time, it was seized by the police. I joined Eye confraternity in 2015. Our leader bought a gun for me. He is dead now.

“I started using the gun to rob. I would go to clubs on Fridays and mingle with Yahoo boys who spent lavishly there. As they were leaving, I would follow them. On getting to a deserted place, I would point the gun at them and collect their money and phones.

“I usually freed Eye cult members among them once they told me they did not have money. I have collected about six phones and sold them to Dotman. I got to him at Totowu area, where I live. I don’t rob innocent people. It is Yahoo boys who have money that I rob. I use the money I get to take care of my family. I have five children from two wives.”