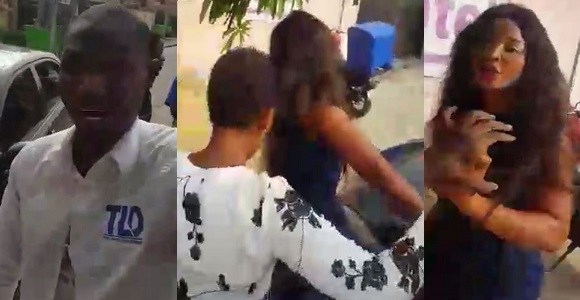 In a new video footage recorded by an Uber driver, a slay queen has been alleged to assaulting the driver by the rough handling him after she failed to pay him the money for her trip.

According to what can be deduced from the video, after ending the trip, the lady asked the driver to go – after waiting for minutes – as the person who was supposed to send her money to pay him was still pending. The driver felt he was about to be conned and so he chose rather to wait and be paid than leave and be played, this was when things began to get messy.

According to the driver, he was rough handled by the lady who tore his shirt after she felt she was being disgraced by him – this prompted the driver to begin recording where he can be seen making a complaint to Uber and threatening to ‘naked’ her.

He and the lady are eventually appealed to by passersby with one of them said to be a police officer before the atmosphere became calm again.

"I will naked you right now, and send it to #Uber" — Driver and his passenger slug it out after she failed to pay him in Lagos. #yabaleftonline (swipe)