14-Year-Old Raped After School Bus Left Her Behind 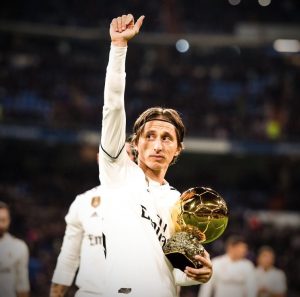 Real Madrid Midfielder, Luka Modric, has criticized Ronaldo and Messi for missing the Ballon d’or ceremony held in Paris, France, on 3 December, 2018. The World Cup finalist revealed this in an interview with Sportske Novosti.

“It’s unfair to fellow players and voters who have nominated them in the past 10 years, as well as to football and the fans. However, people will act the way they think they ought to” Modric said

Meanwhile, the 33-year-old presented the award to the fans at the Bernabeu in Madrid’s 1-0 victory against Real Valladolid in La Liga on Saturday. Modric is the first “other” player since Kaka in 2007 to win football’s greatest individual honor.

Share
Facebook
Twitter
WhatsApp
Previous articleFOOTBALL BETTING: CHECK OUT FREE 15 ODDS FOR TODAY: 16TH DECEMBER
Next articleOffset begs Cardi B for forgiveness live on stage, begs her to accept him back (Video)
- Advertisement -