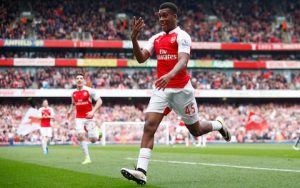 Nigeria International, Alex Iwobi, has come under intense criticism following his below per display during his side’ s domestic league clash with Tottenham at the Emirate stadium. The fixture which corresponded to match day 14 in the current campaign was won by the Gunners 4-2 today.

Arsenal had the chance to kill of the game after taking the lead inside the first 10 minutes of play but for the profligacy of Iwobi in front of goal.

The Nigerian International was then substituted during the half time break after wasting more than three goal scoring chances much to the delight of their fans who have also taken to social media to react to his awful display during the encounter.

I thought Mkhitaryan was good in the first half. Iwobi not so much, did a lot of the things the old Iwobi would have done. Bellerin and Kolasinac both excellent.