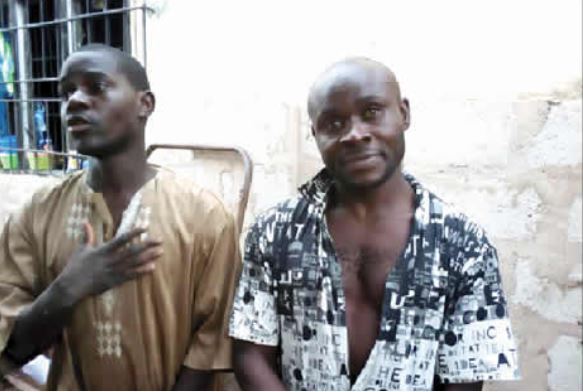 Operatives of the Special Anti-Robbery Squad of the Imo State Police Command have arrested two suspected kidnap kingpins said to have been on the command’s wanted list for a long time, Punch Metro reports.

The state Commissioner of Police, Dasuki Galadanchi, stated that the suspects, Chukwudi Nnabugwu, 29, and Chimezie Victor, 38, were arrested by the F-SARS operatives led by the Commander, Geoffrey Victor, between November 25 and 26, 2018.

Describing the suspects as notorious, Galadanchi noted that they were nabbed following a tip-off.

Galadanchi said the suspects allegedly killed a policeman at Avo and made away with his AK-47 riffle.

The CP stated, “They were arrested at Oguta Local Government Area of Imo State by F-SARS operatives led by Victor Godfrey through a tip-off.

“The notorious kidnappers are Chukwudi Nnabugwu, aka Water, 29, and Chimezie Victor, 38, from Ukweze Egbema, Rivers State. Victor, as of the time of his arrest, was secretly receiving treatment for gunshot injuries on his private parts.

“On interrogation, his wife corroborated that her husband was a kidnapper, having kidnapped one woman, whose husband was living abroad.

“In the same vein, she confessed that in 2016, her husband was shot by Umuguma police operatives on his left hand and his Nissan Pathfinder impounded at the station, while he escaped with bullet injuries.

“It is important to note that the suspects were the ones who killed a policeman at Avo area and went away with his AK-47 rifle.”

The CP added that the arrest of the suspects was an indication that the community policing strategies of the Inspector-General of Police, Ibrahim Idris, which his Command was implementing, were yielding results.