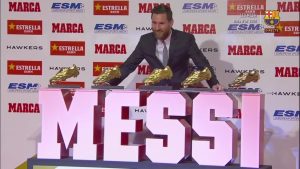 The European Golden Shoe is an award that is presented each season to the leading scorer in league matches from the top division of every European national league.

The Argentine surpasses Juventus forward, Cristiano Ronaldo, who currently sits on four. “I didn’t expect any of this when I started out. I just wanted to be a professional” Messi said

Meanwhile, Messi has enjoyed a fantastic start to the season for Barcelona, scoring 20 goals and providing twelve assists in all competitions so far. He also currently leads the scoring chart for Europe’s top 5 leagues with 14 goals.