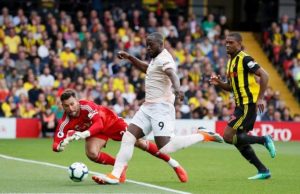 Manchester United striker, Romelu Lukaku, has ended his 12 matches goal droughts for the Red Devils by finding the back of the net in his two last outing for the former Premier league champions.

The Belgian International who found the back of the net during their 4-1 win over Fulham on Saturday started the current season by banging in four goals in just five matches following his exploit at the just concluded FIFA World cup tournament where he helped his national team to a third place finish.

The big Belgian revealed while fielding questions from journalists at the end of their encounter with Fulham that he has been struggling with goal scoring owing to the fact the he added some muscles during the World cup.

“I added a little bit of muscle at the World Cup,”

“I just felt great and I think I played great over there in Russia, but when I came back it is a different style of football. In the Premier League I cannot play with the same amount of muscle as I do in international football.