Home News Feed My Mother Once Slapped My Uncle Because Of Me – Actor, Gentle...
Facebook
Twitter
WhatsApp 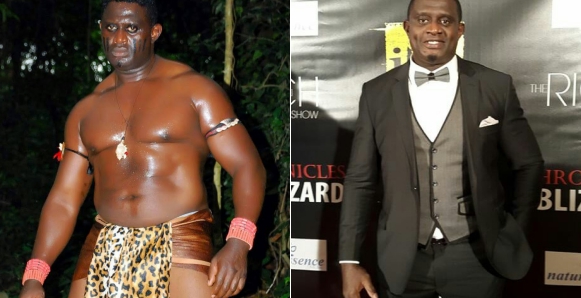 Nollywood actor, Gentle Jack, is popularly known for his roles in action movies. Jack, who came on the movie scene about two decades ago, described himself as an ‘action hero’. With his macho body and outstanding physique, the veteran recently told Saturday Beats how his mother discouraged him from joining the military when he was a teenager.

“However, my mum swore that no matter what I tried to do in life, I should ensure that I never joined the military. She said if I tried it, then it would mean I was not hers. When she said that, I understood the power of the words of a mother over her child. She even went further to warn my uncle to his face. There was even a time she slapped him because of this issue as he was insisting I should join the military.

“Interestingly, any time military officers see me, they think I am an officer. There was a time I had to play the role of a military man in a movie that was shot in Sierra Leone. Some of the military men teased me that I was supposed to be a military man,” he said.

Jack also spoke about how bad he felt about the state of the movie industry in Nigeria, as he emphasised that cable stations had neglected action movies.

“Presently, there are many greenhorns in the industry, so I won’t settle for less. If a producer wants to feature Gentle Jack in their movie, they should have it in mind that they can’t pay me peanuts. This is 2018, so I have upgraded.

“I am an action hero, but they hardly air our action movies on cable stations these days. I am disappointed in the representatives we have at key positions. There should be a channel dedicated to Nigerian action movies; Nigerians love watching action movies. Most of the recent actors don’t have the passion, which is one major challenge we have in the industry these days.

“I can take any role because as an actor, I have to be flexible. For example, if I get roles that will require me to be romantic, I will embrace it. My fan base is very deep; anytime I step out of my house, it is always a scene to behold. They show me love everywhere I go,” he told Saturday Beats.

The actor, who is also a professional masseur, debunked the assertions that his marriage contributed to his absence in movies. He also spoke about how he had been able to maintain a scandal-free career, saying he had the secret.

“When I met my wife, we connected immediately; we met each other on the set of a movie she came to shoot in Nigeria. That was how everything started. When she saw me, she was amazed and told herself that I was a true African man, all natural, no additives or preservatives. Marriage did not affect my career in any way, it cannot stop me from my hustle, and it is a normal phase of life.

“I have the antidote; that is why I don’t have any scandal attached to my name. Life is how you treat it; it all depends on how you handle it. A lot of people put up a fake life in the entertainment industry, they deceive their fans but I am very down to earth. I like to be indoors; I hardly go out. Women love healthy looking men, it is natural but I never allow it get into my head. I was conscious of not allowing anything to mess up my career,” he said.

When asked to explain how he had been able to maintain his physique despite his age, he said, “People are always amazed at my physique, especially the fact that I look younger than my age; some of them even ask me if I am a vampire.”