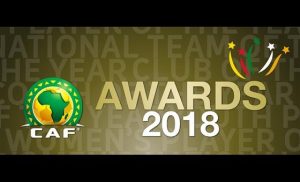 The Confederation of African Football (CAF) has released the list of nominations for the 2018 awards scheduled to hold on Tuesday, 8 January 2019. The awards will hold at Senegal’s capital city, Dakar.

Arsenal and Super Eagles forward, Alex Iwobi, has been nominated for the African Player of the year award. The 22-year-old played a key role as Nigeria secured their first Africa cup of nations qualification since winning the competition in 2013. Iwobi was shortlisted alongside European-based stars like; Sadio Mane, Pierre-Emerick Aubameyang, Riyad Mahrez, Mohammed Salah, amongst others.

Meanwhile, Leicester City Midfielder, Wilfred Ndidi was nominated in the African Youth Player of the year category. The 21-year-old won the young player of year in the 2017/18 season for the English premier League side and has also enjoyed a fine start to the season, appearing in all of Leicester’s 15 games so far in the league.

See photos of shortlisted players below: 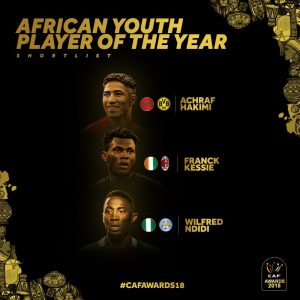 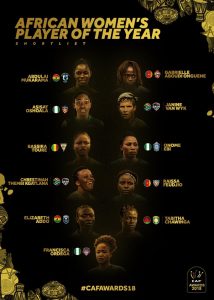 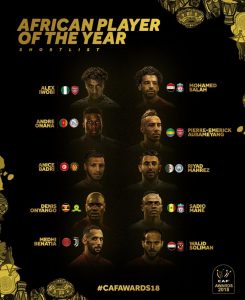