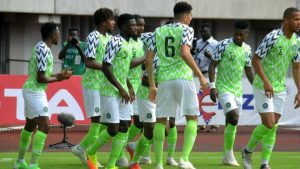 The super eagles remained 44th in the world but dropped down a spot to fourth place in Africa in the recently released FIFA rankings for November, 2018. Senegal are now the top ranked African team with 1,505 points and 23rd in the world.

Belgium and France remain top in the world with 1,727 points respectively while Brazil retain third spot with 1,676 points. Meanwhile, the Super Eagles recently secured qualification for next year’s Africa cup of nations in June. The next FIFA/Coca-Cola world ranking will be related in December.