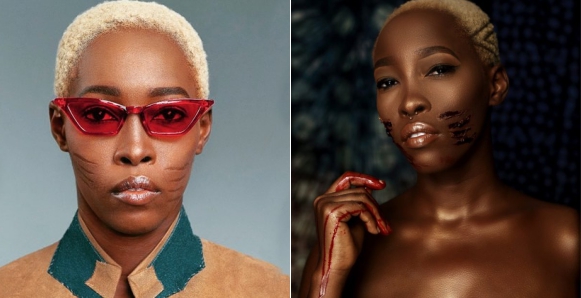 Adetutu OJ, the model with prominent tribal marks, became an international sensation after she caught Rihanna’s attention and the singer began to follow her on Instagram.

Her newfound fame seems to be attracting people into her life like moths to flames, and this includes people who had abandoned and written her off.

The single mother, while speaking with Hero Daniels, revealed that she became pregnant as a teen.

Afraid, confused, and unsure, she went to the man responsible and he asked her to keep the baby.

However, the next time she went to his home, he had moved without informing her. No one knew his whereabouts and there was no way she could reach him. He never reached out or got in touch with her, not even after their child was born.

Adetutu was forced to give up the child to be fostered for four years. After she had been able to stand on her own, she went back for her child and they now live together.

But, Adetutu said the father of her child recently contacted her on Instagram after she became a viral sensation. His first contact comes 9 whole years after she had his child.

She also narrated how her ex-boyfriends were ashamed of her because of her tribal marks. Some avoided being seen out with her during the day. She added that some of her ex-boyfriends are back now that she’s popular and are trying to be friends but she doesn’t intend to let them into her life.