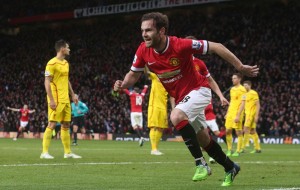 Spanish International, Juan Mata, seems to be enjoying the Red Devils proficiency in front of goal recently. They have shipped in a whopping eight goals in their last two domestic league games with the most recent being the 3-1 thumping of Huddersfield at the Theatre of Dreams.

The pint size midfielder who joined the Red Devils from ‘bitter rival’ , Chelsea, was on song during their last match and he didn’t fail to impress with his crisp passing and trickery on the ball.

As a result of the impressive victory which put them just 8 points adrift of 4th placed on Christmas day, the Spaniard has reacted by taking to his twitter handle.