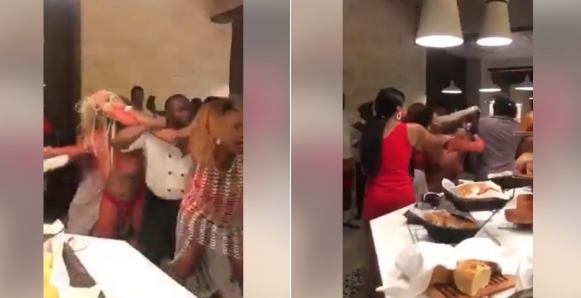 There was chaos at a public event recently after a serious fight broke out between some ladies.

The ladies who were well dressed and sophisticated –  popularly referred to as ‘slay queens’ – shocked many people after they started fighting following a tensed argument over food at the event.

The ladies threw punches at each other and dragged themselves by the hair while the fight raged on.

Even one of the ladies’ wig was removed in the clash and some who tried to separate the fight, pushed away.

Other guests and staff at the event who were left shocked and embarrassed by the fight, later intervened and separated the aggrieved ladies.