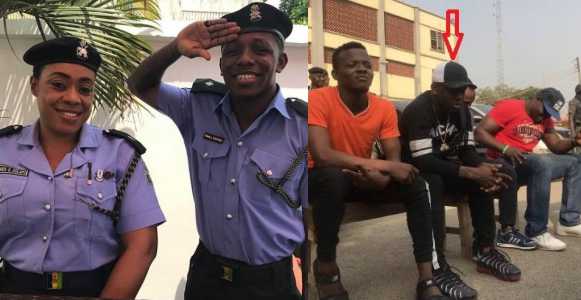 On Monday, Nigerian pop star Small Doctor who also doubles as a Police brand ambassador was arrested and paraded for unlawful possesion of firearms and threatening an officer with a gun.

Edgal Imohimi, Lagos State Commissioner of Police while parading the musician along with three other persons said he was arrested on allegations that he threatened a Police officer who was on traffic duty along Oshodi expressway, Lagos.

“It was alleged that some unknown men, four of them, in an unregistered green SUV had brought out a gun and threatened a policeman that if he does not leave the road, they will shoot him.

Believing that they were armed robbers, I sent out my men and fortunately, with the DPO in charge of Shogunle division, they were able to intercept them and the men were arrested and were brought down to the headquarters for interrogation.

It was then discovered that one of them is the same Adekunle Temitope, a.k.a. ‘Small Doctor’. They were arrested in possession of a functional rifle, cartridge and some of their personal belongings” Imohimi said.

Below is how Nigerians are reacting to the news

This Small Doctor issue is a typical illustration of Trust nobody. Brand dey arrest Brand influencer onto say he carry Brand product.

Small Doctor has been arrested and paraded for Unlawful Possession of Firearms charges and has been accused of threatening to shoot a Police officer. Small Doctor is a Nigerian Police Ambassador by the way. He done enter big trouble sha.

Could it be that Small doctor uses guns to kill mosquitoes? pic.twitter.com/DU1AfeGzq8

Small Doctor, is a Nigerian Police Ambassador was caught by the Police for unlawful possession of firearms and threatening a police officer.

The State of Nigeria.

Small Doctor was arrested by the police 6 days to his concert. What is this ? pic.twitter.com/4JmxRciXDL

Some one just reminded me that Small Doctor is an ambassador of the Nigerian police force. Ha! Don't they know the meaning of Ambassador ni? How can you beat your Ambassador like that?

Oh! Sorry I forgot this is Nigeria.