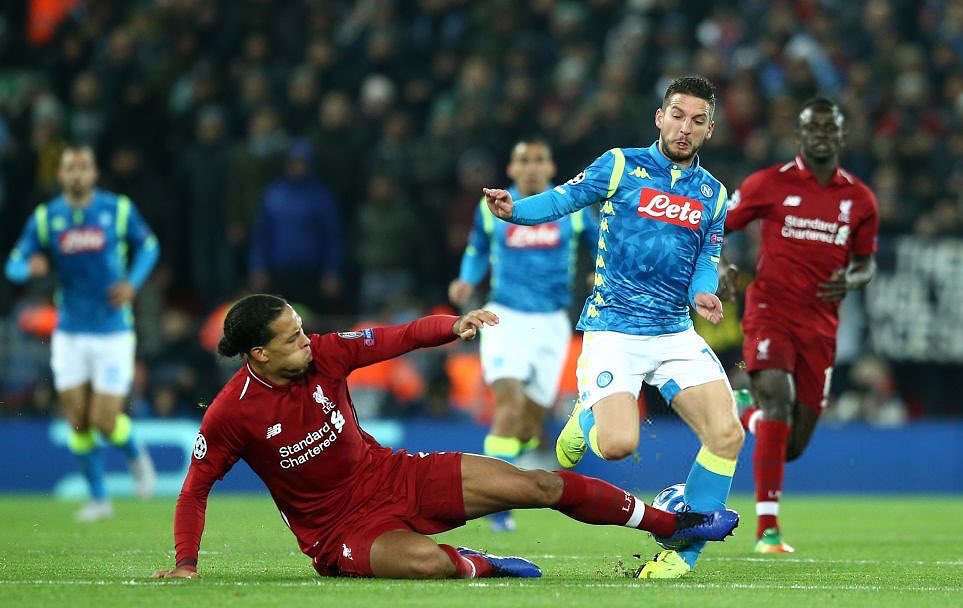 Liverpool beat Napoli by a lone goal to nil during their UEFA champions league last group stage match yesterday at Anfield to book their place at the last 16 of the elite competition. Napoli went on to finish 3rd on same points with the Reds but as a result of their Inferior head to head with Liverpool – The would now compete in the Europa league as a result.

Liverpool took a first half lead and the Naples began to commit men forward in search of the equalizer as a draw would have seen them progressed to the next round ahead of their host but the Reds held firm and in one of the Naples attacking moves, Liverpool defender, Van Dijk, launched into a nasty tackle on Mertens and he was subsequently shown a yellow card.

This has got football lovers reacting on social media as some have likened the event to the one involving Liverpool’s forward, Mohammed Salah and Sergio Ramos during the last edition of the champions league final where Ramos broke the Egyptian’s shoulder.

Van Dijk got the ball first but his leg in that sliding tackle wasn't on the ground, which makes it a foul and a fair yellow. https://t.co/TqsHkdCWAv

Imagine this was Serio Ramos, and not the golden boy Virgil van Dijk. Liverpool fans would be falling themselves with outrage! #LIVNAP pic.twitter.com/656QohZO2l

Liverpool fans May 2018: “That’s clear foul and a red card to Sergio Ramos for a disgusting tackle on Salah.”

Also Liverpool fans: “Van Dijk was on the ball first. How on earth was that a yellow card!?” pic.twitter.com/vBkAnhaAeI