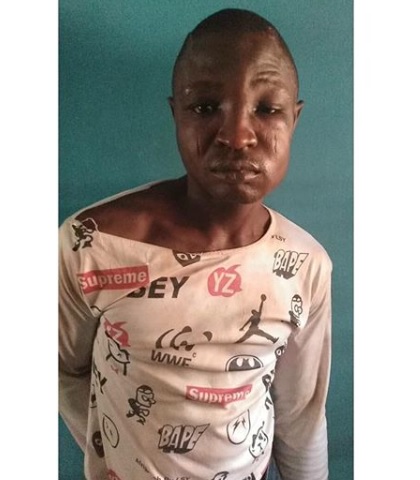 The operatives of the Nigerian Police have arrested a young man identified as Sina Kasali, for allegedly killing his wife, Sherifat Kasali, in Abosule, Agbado, Ifo Local Government Area of Ogun State.

According to a report by PUNCH Metro, the suspect who is a butcher and was arrested by a team of policemen from the Agbado Police Station led by the Divisional Police Officer, CSP Sunday Omonijo, reportedly beat the 26-year-old nursing mother to death on Saturday after a disagreement ensued between them.

It was gathered that Sherifat had accused her husband of peeping into the private parts of a neighbour, who is said to be a commercial s*x worker. He reportedly chided the wife for being rude and subsequently beat her up until she collapsed.

A neighbour had invited a nurse to attend to Sherifat because Kasali refused to take her to a hospital. He was said to have prevented the nurse from treating his wife until she gave up the ghost.

While speaking to a correspondent, a resident, who spoke on condition of anonymity, said the suspect wanted to run away but was held down while the police were alerted.

He said the couple had lived together for about 10 years, but that their relationship was fraught with violence, adding that Sherifat, a mother of three, could have survived if her husband had allowed her access to medical treatment.

He said, “They had been living together for 10 years and had three children. Their last born is about three-month-old. He (Sina) always beat the woman and people had warned him several times to no avail.

“The wife had accused him of peeping into the private parts of a sex worker in their compound that morning. He got angry and dragged her inside. He beat her to a stupor and refused to take her to the hospital. We called a nurse to attend to her but he did not allow the nurse to treat her.”

The brother of the deceased, Segun Rasheed, said the family was notified of the incident by a neighbour, who checked the deceased’s phone contacts.

In an interview, the 38-year-old suspect said he only slapped his wife, adding that he did not allow the nurse to attend to Sherifat because he and the nurse were not in a good term.

He said, “My wife and I had been living together peacefully until some bad women in our compound started influencing her. Those women drink. She was always with them whenever I went to work. That was how she became a drinker too and she started being rude to me.

“Two days before the incident happened, he accused me of gazing at a neighbour’s backside and I warned her not to accuse me of such a thing again. She began to abuse me and I slapped her.

“Earlier that day, she told me that she was pregnant and I told her to abort it. Around 4pm on Saturday, she wanted to go and fetch water. I warned her not to go and she started abusing me. She wanted to go by all means and I pushed her.

“She lay on the bed and held her stomach. She was groaning with pains. I suspected that she had used some drugs to abort the pregnancy. I called my brother to get a car so that we could take her to a hospital.

“While I was waiting for my brother, the nurse came. She happens to be somebody I had sold meat to sometime ago and she refused to pay me for days.

“We fought each other before she eventually paid me and since then, we have not been talking to each other. It was because of the grudge that I did not allow her to treat my wife. I did not beat her that day.”

The Ogun State Police Public Relations Officer, DSP Abimbola Oyeyemi, said Sina in his statement to the police confessed to beating his wife that Saturday.

Oyeyemi said the corpse of the victim had been deposited in the Ifo General Hospital morgue for post-mortem, adding that the case had been transferred to the State Criminal Investigation and Intelligence Department, Eleweran, Abeokuta, for further investigation.