Home Trending ‘The Acting CJN Is Already Fulfilling The Goal For Which He Was...
Facebook
Twitter
WhatsApp 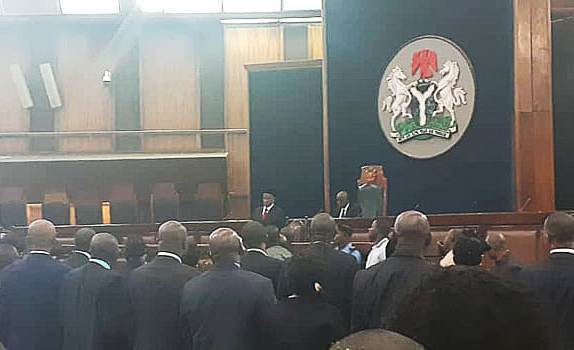 The Acting Chief Justice of Nigeria (CJN), Justice Tanko Mohammed, has  inaugurated 250 members of the election petitions tribunal for the 2019 general election at an event which held at the Supreme Court Complex, Abuja on today.

The new CJN was only sworn in yesterday and has already set the stone rolling after less than 24 hours in service. His action today did not go without reactions from Nigerians.

Don't think #OnnoghenSuspension is a joke if you're less informed, it's a coup. Acting CJN have already began working. Southeast is dead before Bubu, South south have had the taste. South West won't believe what will happen to them.

They might wake up to see VP dismissed as well

Any act he performs is illegal.

Any act these 250 members perform, are illegal; including Election Petition tribunal results etc.

In the next five years, we shall still be reeling from Buhari's fuckup. https://t.co/7uxF6slMcv