In the early hours of election day, it has been reported that several bomb explosions rocked Maiduguri. The explosion started around 5 am and stopped around 6 am. 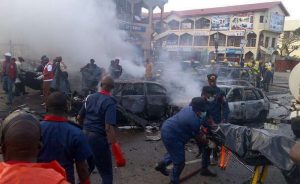 This was an attempt to sabotage the election by the Boko Haram sect, however, their onslaught has been contained by the Nigerian Army.

Residents are still shock and panic, and this may put the election in jeopardy, as people are apprehensive about going out to vote.

Follow Information Nigeria for the update as the situation unfolds