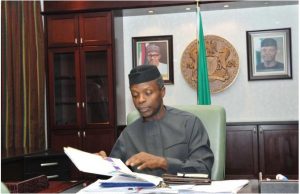 Following the gunshots heard around the premises where the Vice President, Yemi Osibanjo campaigned in Ilorin, Kwara State on Thursday 21st of February 2019, many Nigerians took to social media to express concern over the safety of the VP.

Let me clarify 2 issues: 1. VP Osibanjo’s convoy was not attacked yesterday in Ilorin. The reported gunshots were after VP left the venue. 2. Due ONLY to time constraints yesterday, VP couldn’t go to Abia from Kwara as earlier billed. He’ll surely make the Abia State trip sooner.

There have been concerns on the safety of the Vice President, since the helicopter crash in Kogi State.

Campaign for the 2019 presidential  and national assembly election came to an end 12am on Friday 22nd of February 2019.