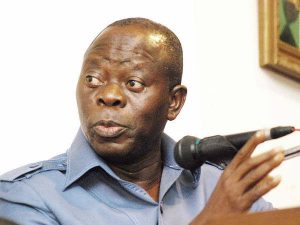 THE NATIONAL CHAIRMAN of the All Progressive Congress, (APC) comrade Adams Oshiomole has said that the People’s Democratic Party (PDP) is set to win the presidential election by rigging.

Oshiomole made this known in Abuja while reacting to the PDP’s presidential candidates statement against President Muhammadu Buhari.

He affirmed that the opposition party was ready to win the polls by hook or by crook, which will not be condoned.
Oshiomole added that President Muhammadu Buhari’s riot act against thuggery and ballot box snatching would not bother any right thinking Nigerian that does not intend to buy votes in order to win an election at all cost, saying anyone caught in the act will be dealt with under the law.