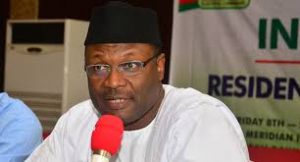 Chairman of the Independent National Electoral Commission, Professor Yakubu Mahmoud on Tuesday, while addressing stakeholders at the National Election Collation Centre in Abuja, informed the audience that election offenders can only be punished as provided for in the Electoral Acts of Nigeria.

When he was quizzed on the legality of the order of the President to shoot ballot snatchers at sight. Professor Yakubu Mahmoud had this to say;

He also assured the Audience that contrary to reports INEC’s head of logistics was working in his office and not arrested has it was reported.