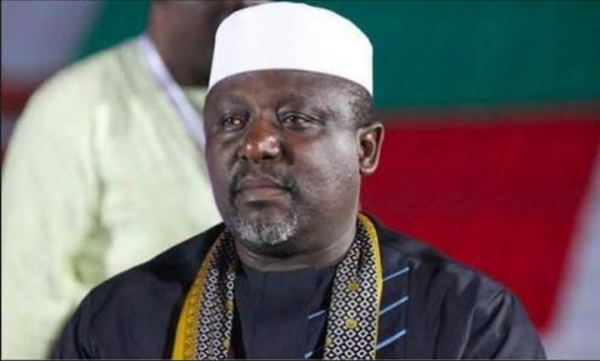 Reports have emerged online, wherein Governor Rochas Okorocha of Imo state, has been accused of threatening to execute the Independent National Electoral Commission, INEC’s Returning Officer(RO) for the state, if he’s not declared winner.

Okorocha had contested the National Assembly elections on Saturday, with hopes to go to senate on leaving office as governor.

However, according to the reports, Okorocha’s senate bid is under threat, having failed to convince voters to vote for him – and results coming from Imo, aren’t looking good on him – hence, it has been alleged that the governor is holding the RO to declare him winner or face death.

IGP , your police commissioner in Imo is holding Professor Ibeabuchi hostage under the orders of Gov Rochas and has given him 30 minutes to pronounce Rochas as winner in Orlu. He is providing Cover for over 500 thugs. If anything happens to them the world knows where to look.

It is a real shame what politicians are turning the electoral process to. I just hope what I'm hearing Rochas is trying to do in Imo isn't true. If you constantly boast of being so popular, why not let the people determine how popular you really are?

Something is wrong with ROCHAS OKOROCHA. Not sure what it is, but he should be made to face the consequences of his impunity..!

This is a joke taken too far.