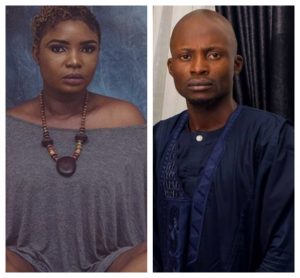 Yorub actors had gone on a courtesy visit to the comedian’s home and had decided on taking photos with the veteran.

However, while others had posed for photos hugging the veteran, Jigan was pictured handing over a wad of cash to the actor.

The photo has since gotten many talking to include writer Tope Delano, who took time to slam the comedian.

If this isn't the most disrespectful and appalling picture I have seen today…like really???? What exactly was going through your industrial waste-filled brain to make you take such a picture, like what exactly?!!!! TFF!!!!! pic.twitter.com/1MfKeKbmXi