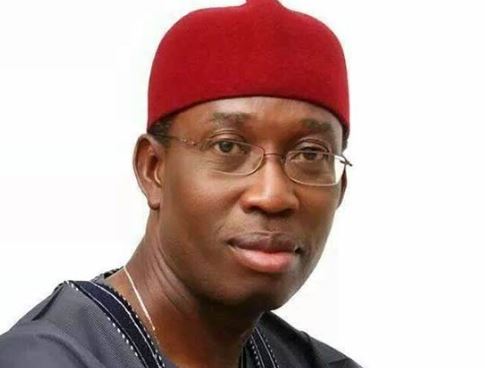 Incumbent governor of Delta state, Ifeanyi Arthur Okowa was all praises for a former governor of the state, James Ibori, upon being declared as winner of the March 9, governorship election.

In his victory speech, the present governor hailed the former governor as the mentor, who taught him everything he knows about governances – while thanking him for his support through the years.

I want to appreciate my leader, former Governor James Ibori for his encouragement, support and all he has taught me all through these years, he said.

It will be recalled that Ibori, who served as Governor of the state between 1999 to 2007 was convicted of corruption for which he served jail term in the UK.

The statement which he shared via his Twitter handle on Monday, sparked serious reactions amongst some Nigerians, who decried why a former governor convicted of corruption will be someone’s mentor.

South south should really be ahsamed with the crop of leaders from that region. Corrupt and bloodsucking kinda individuals

…you mean the common thief who was prosecuted in the UK for embezzling funds from public coffers…. well done!! Na una indigenes I blame!! pic.twitter.com/vMhksXPUB7

Appreciate who? Kai. What nonsense is This?

Only in Nigeria will a chronically corrupt and convicted person serves as mentor to a sitting Governor.

Did he teach you how to steal and evade justice too?

😂 they are thanking ibori oo, issokay we move 💪🏿

Taught you how to steal or what? I don’t understand what one can possibly Lear from James Ibori

Following the drama that ensued within the PDP camp after Daisy Danjuma, a member of the board of trustee of the party, endorsed Godwin...
Read more

Following the now-trending news that PDP members took to the street to protest the removal of Emeka Ihedioha as Imo state governor by the...
Read more
- Advertisement -