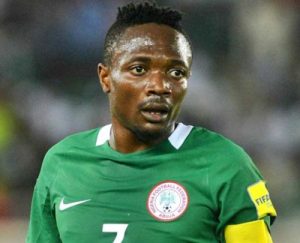 The Super Eagles of Nigeria captain, Ahmed Musa, has surprised a street cleaner after their friendly match fixture with Egypt at Asaba International stadium. The woman was said to have approached the Super Eagles camp in Delta state in search of a menial job but was unable to secure one.

Ahmed Musa reportedly saw the cleaner’s son afterwards and beckon on him to come forward before the boy’s mum stepped forward to pick him up. He was then said to have engaged the woman in a chat following which he collected her details.

The woman was said to have screamed moments after he left as she was credited with the sum of N250,000 by the footballer.