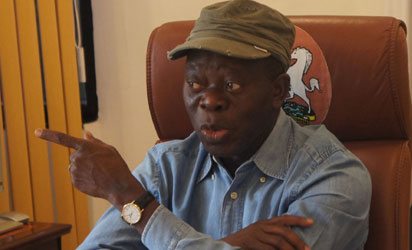 A former governor of Edo state and the National chairman of the All Progressives Congress, APC, Adams Oshiomhole, is currently receiving some accolades on social media for being a ‘tough’ chairman.

The former labour leader is being praised by some supporters as  the perfect one to lead a party such as APC. They gave him credit for ‘dismantling the dynasty’ of Bukola Saraki in Kwara state, and the almost growing ‘godfather’ tendencies of Governors Ibikunle Amosun and Rochas Okorocha of Imo state and now, for being the best APC national chairman.

President Muhammadu Buhari and the leadership of the APC, had met with newly elected senators-elect of the party at the Presidential Villa in Abuja on Monday. Amongst the many things that Oshiomhole said at the meeting, here are three things that have become the gospel for  some of his supporters.

Do not do business with PDP members in the house. Adams Oshiomole warned the newly elected APC members.