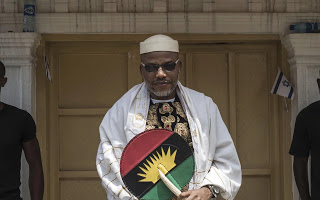 Several reactions have trailed the revocation of the bail initially granted to the self-proclaimed leader of the Indigenous People of Biafra (IPOB), Nnamdi Kanu.

Justice Binta Nyako on Thursday had  ordered the arrest of Kanu, after he failed to appear in court. The IPOB leader was granted bail on April 25, 2017 with some conditions – which he has now flouted.

In their reactions, some hailed the court for the move saying there’s too much indiscipline everywhere but the ‘Biafrans’ have taken to throwing tantrums at the ‘zoo’.

Take a look at some reactions

It's in Nnamdi Kanu's case that you have guts, what happened to Orji Kalu whose arrest has been ordered by the court?

This institution has been bastardized to the extent one is no longer afraid of its orders.

Court orders re-arrest of Nnamdi Kanu. Great! Indiscipline mustn't be tolerated, not even from expensive and skillful clowns. Jokes should have a limit!

In sane climes, Nnamdi Kanu's ability to influence would be a good case study….
But no… We all see the negatives

nnamdi kanu re-arrest might cause Nigeria a great harm and possible end the entity, his first arrest is wat Nigeria is suffering.

The Revocation of HRM King (Prof.) Nnamdi Kanu's bail is nothing but a MOCKERY OF JUSTICE in Nigeria. If the court is not aware of his residence invaded by Nig. Soldiers – then the court is not WORTHY to try Kanu in any case – Evil can't begat Justice or Righteousness. Shalom!