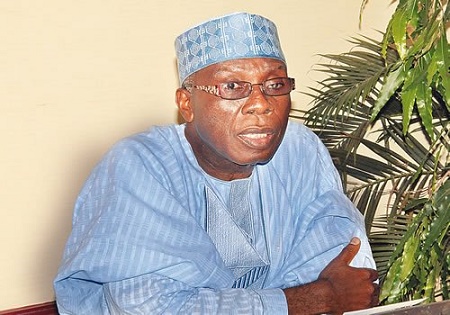 Nigeria’s minister of agriculture, Audu Ogbeh has sparked serious reactions on social media, after he complained about Nigerians ordering pizza from London.

Ogbeh, during his address when he appeared before the Senate committee on agriculture in Abuja, complained about how Nigerians import everything from abroad, including pizza.

Ogbeh, who had gone to defend his ministry’s budget for 2019, said Nigerians order pizza in the morning, using their cellphones via the British Airways airlines to pick it up in the evening.

“Do you know, sir, that there are Nigerians who use their cellphones to import pizza from London; they buy in London and bring it on British Airways in the morning to pick up at the airport. It is a very annoying situation and we have to move a lot faster in cutting down some of these things.”

He said as “a nation of importers”,  “Toothpick every year costs us 18 million dollars; tomato paste costs us 400 million dollars. Meanwhile, a basket of tomatoes is less than N2,000.

“The farmers are losing money because the processors do not have enough funds to set up factories. Two factories have started off. I am sure by the end of next year we can comfortably tell the importers of tomato paste to stop.”

Chai, Buhari's Minister of Agriculture, Audu Ogbeh is angry that Nigerians are ordering Pizza from London with their own money via British Airways, God… Come quickly to Nigeria.

With this eloquence and confidence, I choose to believe our Minister for Agriculture, Audu Ogbeh understands what he is talking about here — Yeah, it sounds funny but not impractical,… https://t.co/HK0VbyXVX8