Disturbing! Woman savagely flogged by her brother for cheating on her husband (Video) 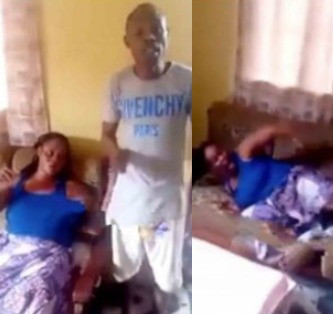 Social media was on fire last night after the video of a woman whose identity is yet to be ascertained surfaced online.

The video showed the woman being flogged by her brothers for allegedly cheating on her husband whose name was given as Hakeem.

One of the brother’s in the video could be heard saying the family doesn’t condone such act and thus she will be dealt with.

– Viral Video of a lady being flogged mercilessly,by her brothers, for cheating on her husband.

– The lady’s brother decided to take it upon themselves,to punish their sister,for cheating on the husband, while praising the man for his patience. 📹 ib9japic.twitter.com/gXBNYOeESR