The Federal Government, on Thursday, closed its case against the suspended Chief Justice of Nigeria, CJN, Justice Walter Onnoghen, after it produced only three witnesses that testified before the Code of Conduct Tribunal, CCT. The Suspended Chief Justice of Nigeria (CJN) Justice Walter Samuel Nkanu Onnoghen Though FG initially expressed its intention to produce a total of six witnesses to substantiate all the allegations it levelled against the embattled CJN, however, shortly after the third witness was discharged, the prosecution counsel told the tribunal that it would be unnecessary to call further witnesses. The prosecution counsel, Mr. Aliyu Umar, SAN, told the tribunal that the defendant was at liberty to summon any of the listed but uncalled witnesses to testify on his behalf if he so wished. He was immediately overruled by the CCT Chairman, Mr. Danladi Umar, even as Onnoghen’s lawyer, Chief Adegboyega Awomolo, SAN, rejected the offer presented to him.
If it feels that it is satisfied with the evidence of the three witnesses, then so be it”, the CCT Chairman held. Thereafter, Awomolo told the tribunal that the CJN would in line with section 303 of the Administration of Criminal Justice Act, ACJA, 2015, enter a no case submission with respect to all the allegations the FG levelled against him. Awomolo therefore, applied for the record of proceedings of the tribunal to enable his client to file the necessary processes. The case was subsequently adjourned till next week Friday for hearing of the no-case application by the embattled CJN, as well as for adoption of the final written addresses. Earlier in the proceeding, the third prosecution witness, PW-3, Mr. Ifeoma Okagbue, a staff of Standard Chartered Bank in Abuja, told the tribunal that it was not true that the defendant possessed either $1million or £1million in any of the five bank accounts that necessitated the charge. Okagbue who told the tribunal that she started managing Onnoghen’s bank accounts since 2015, gave a load down of both the opening and closing balance of all the accounts from January 2018 to January 2019. She said the accounts were all linked to one Bank Verification Code, BVN, adding that the bank had upon securing an approval from the defendant, diverted funds from the accounts into various profit yielding projects,. The PW-3 told the tribunal that profits that accused the investments were credited back into the accounts. While two of the accounts are in Naira, the three others were Pounds Sterling, Euro and Dollar accounts. The witness told the tribunal that all the accounts were domiciliary, and were opened and managed at the branch of the bank in Wuse 2, Abuja. Before Mrs. Okagbue mounted the witness box, the PW-2, who is a retired Director at the Code of Conduct Bureau, CCB, Mr. Awal Yakassai, told the Mr. Umar led three-man panel that contrary to what was alleged in the media, he said the suspended CJN owned only five houses. He said it was not true that CCB investigators linked the ownership of 55 houses to the defendant. The witness made the disclosure after he was shown copies of Justice Onnoghen’s asset declaration forms, which the Federal Government tendered in evidence before the CCT. The embattled CJN was said to have submitted the forms marked as Exhibit 2 and 3, to the CCB in 2014 and 2016. Answering questions under cross-examination, the PW-2, told the tribunal that he served at the CCB for 29 years before he retired in April 2018. He admitted that the CCB was yet to verify Justice Onnoghen’s assets with a view to finding out if he made false declarations of his assets Aside allegation that he failed to declare his assets as prescribed by the law, FG had charge marked CCT/ABJ/01/19, FG, alleged that Onnoghen operated five foreign bank accounts, contrary to section 15(2) of Code of Conduct Bureau and Tribunal Act. FG had insisted that it was the CCB that satified Onnoghen’s trial based on certain deficit that were discovered in his asset declaration forms provided. 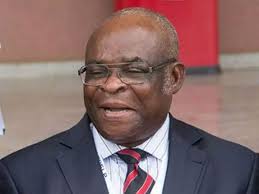