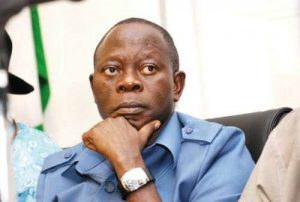 The National Chairman of the ruling All Progressive Congress, Adams Oshiomole, has mocked 15 out of the 16 APC senators that left the party to join the PDP but failed to get re-election to the Senate.

He also took a slight dig at the only surviving Senator out of the 16, Dino Melaye, by saying he got re-election because God needs him to entertain the house, apparently in reference to Melaye’s singing prowess.

“Nigerians punished them”, “the one that God left was for him to entertain the house”.