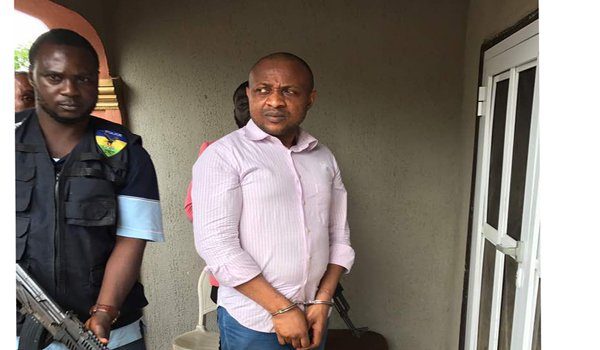 Alleged billionaire kidnapper Chukwudumeme Onwuamadike, aka Evans, is said to be unable to pay his legal representation fee, hence has affected his ongoing trial.

His lawyers have reportedly missed two dates in the two trials which are before Justice Oluwatoyin Taiwo of an Ikeja Special Offences Court.

NAN reports that Evans’ lawyer, Mr Chinoye Obiagwu (SAN), and his co-defendant Chiemeka Arinze in one of the kidnap cases, had written to the court to request for adjournment in both cases.

“Now that he (Obiagwu) is on hand to lead the defence, he finds that the families of the defendants are yet to provide some necessary yet critical obligations, which to prevent any embarrassment, and for the safety and well being of the defendants, who are still being held in custody, he (Obiagwu) would not want disclosed to the open court,” letter read.

Justice Taiwo said “It is ridiculous that we should wait for the first defendant (Evans) and his counsel to negotiate for a case that is already in court.”

However the Judge, reluctantly accepted request  for adjournment and granted different adjournment dates for the two suits.

“The first and second defendants have filed submissions on the trial-within-trial, the prosecution has responded but are yet to serve the first defendant.

“The first defendant’s counsel had been absent for two dates in a row.

“This case is adjourned to March 20 for adoption of final written addresses.”

Evans, according to NAN is facing trial alongside Victor Aduba, a dismissed member of the Nigerian Army.

They are accused of kidnapping Mr Sylvanus Ahamonu, taking him hostage for more than nine weeks and collecting a ransom of 420,000 dollars.

For the second one, Evans is facing trial alongside Joseph Emeka, Chiemeka Arinze and Udeme Upong over the attempted kidnap of Chief Vincent Obianodo, the Chairman of the Young Shall Grow Motors and the date for further hearing is March 29.